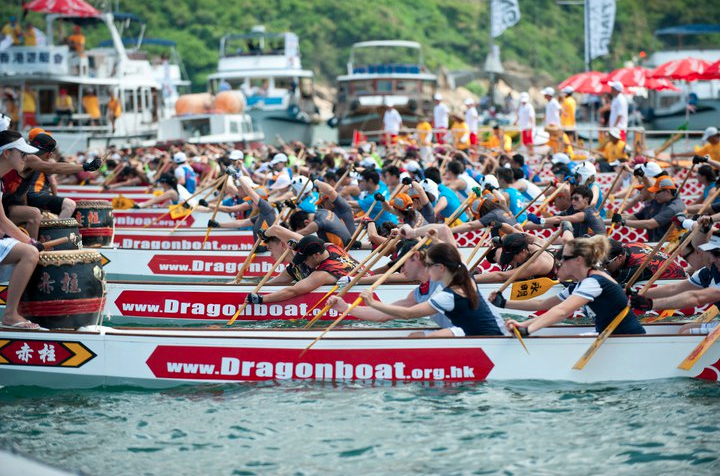 After Saturday’s strenuous training session at Stanley – “Hong Kong style”, complete with 60 year old traditional fisher woman as our helm, I felt quietly confident that the Windy Panda paddlers would do themselves proud once again. As the only team representing the UK and still fresh from our London Rotary victory, it seemed only right to call ourselves “Team GB – by default”. 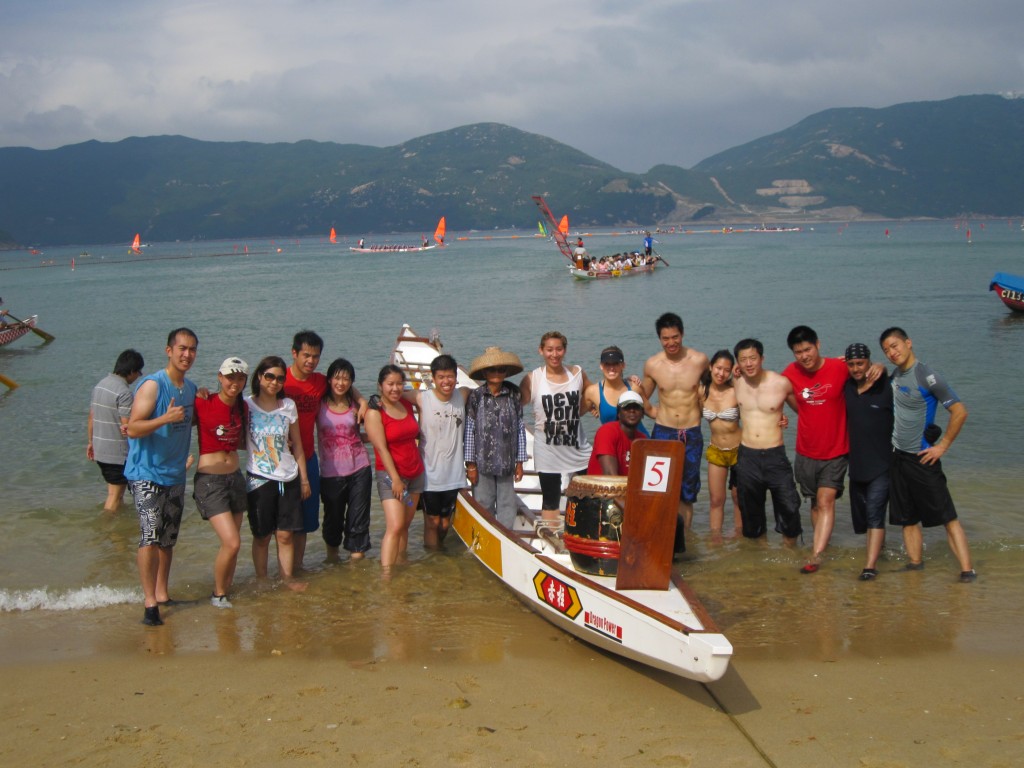 Earlier forecasts threatened us with stormy weather and showers but fortunately the conditions were close to perfect with minimum clouds, calm waters and a peak temperature of 33C (the hottest on record for the Stanley event). Contemplation of training in the sauna did go through my mind several times that day. The Stanley beach was predicted to be filled with some 10,000 spectators with participants of: 144 mixed teams, 69 men’s teams and 9 women’s teams.

Assembled at the WP tent and drawing up the GB flag, the team were kitted out in the special edition Stanley team shirts designed by I’m Worth It and T Seen. The brave chose to wear their very well insulated WP head dressings. Following WP tradition, numerous team photo opportunities were exploited whilst pre-racing rituals were carried out which included grazing on breakfasts bought from famous traditional eateries like McDs and 711.

Due to the heat, some team members took it upon themselves to customise their team kit by slashing off the shirt arms to provide greater ventilation. Even Vice Captain Wally demonstrated his innovative fashion sense by wearing the sweat drenched cuttings as a fetching head band much to the horror of Captain Jokey Joke maker. 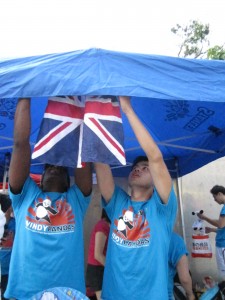 With the first race approaching, WPs switched on their race faces. To the benefit of the team, No. 1 had volunteered to support the WP drummer in calls as he had expressed that he was experienced in shouting, paddling and counting. Adrenalin was running high at the start of the race waiting for boat 6 to once again adjust themselves as the adjudicator threatened disqualification for the final time if they did not stop inching forward.

After what seemed like a lifetime lining up the twelve boats, the gun shot was heard and the boat powered through the water. Due to such hot weather, the build up from the starting pace was not as fast as it should have been but the power of the boat compensated resulting in a strong first race. Pandas had visibly given it their all resulting in an exhausted crawl out of the boat and onto the beach as if they had just been marooned on a desert island. The race result was 6th place with an impressive time of 1.26.50.

Keen to improve on the first race time, WPs showed quiet composure and determination as we lined up in Lane 1. The second race turned eventful with one team seen to have started with paddles in the water (you know who you are) and the plugs at the base of our boat coming loose! Despite the set back, the start was much improved with a strong and steady transition into full reach. WPs maintained the power and gave a smoother performance coming in 9th place with a time of 1.28.82.

Fully satisfied with two races and not expectant of any more to follow WPs went walkabout foraging for food, freebies and friends amongst the crowds and tents. Pandas returned with prizes which included various fans, some oddly tasting garlic tea in a can (it was free for a reason) and half of a giant watermelon. In high spirits, Fai de Laa, Slow Mo, I Love It, Judas and Miss America demonstrated to the adjacent corporate tent which was fully equipped with beer crate, pizzas and a blaring sound system, just how to party and proceeded in challenging them to a dance off. Resting pandas showed their apparent approval by quietly nodding under the comfort of the shade. 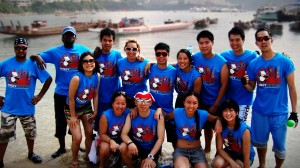 After another hour, Jokey and Wally returned to proudly announce that WPs had made it into the Silver Plate final which would begin in 15 minutes. A rush of excitem

ent ensued at the WP camp but half of the team were missing and the rest began to pick up their gear to head to the beach. After pushing through the throngs, a lonely boat was seen at the water front with another team slowly piling in. A small discussion passed which concluded that the boat belonged to WPs and if they did not set off quickly they would be disqualified from the final race.

With half the team quickly loading onto the boat and the rest nowhere to be seen a feeling of dismay and panic washed over the team. Inexperienced pacer Judas, tried to flag down the missing pandas who were lost in the crowds by waving her “bendy” arms frantically as if trying to land a jumbo jet whilst yelling various expletives.

The team was soon complete except for the WP drummer who like her team mates had assumed that two heat races would be all that the WPs would expect to race. Unaware to WPs at the time, WP drummer had already begun her end of race celebrations tucking into free food and tequila shots on the Bloomberg boat. With a final call for the WP team heard over the speakers, WP drummer grabbed her panda hat in one hand, a bottle of wine with the other and shot out like a bat out of hell. 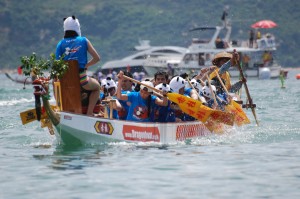 Meanwhile at the beach a WP supporter innocently taking photos at the time was snatched and coerced onto the boat. Whilst perched at the top with a drum stick shoved into her hand this virgin drummer tried to settle herself with a look of a deer in the headlights. As instructions were made to head out, the official drummer burst out through the crowds waving frantically to hail down the WP boat much to the amazement of the commentators and the delight of the team.

With a fully reunited team, we paddled up to the start line waiting for the 12 boat line up. Meanwhile I’m Worth It had spotted amongst the corporate yachts, a boat fully decked out with bikini clad ladies also known as the Play Boy boat. This threatened his focus and he began to question for a split second his loyalty to the team but his resolve was strong. As the boats lined up, the atmosphere was electric. After all the panic at the beach, the boat felt relatively calm but determined nonetheless. Calls of encouragement from adjacent pacers could be heard such as “Focus team! No one’s here except us…and 11 other teams, but it’s just us!”

Suddenly the noise dropped, and the only shouts coming from the drummers were “down and ready”. Moments of silenced passed, followed by the gun shot and an explosion of energy was released by all. The start was solid and increased in pace through to a smooth transition and into full reach. Competition with the other boats was fierce with hardly any pulling away. From either side, it felt like the boats were breathing down our necks through out the full 270 metres. The Silver Plate final was by far the best and quickest race that day which ended in a photo finish, a feeling of pure exhaustion, elation and emotion that we had all experienced something truly amazing.

For us, it didn’t matter which place we came but to paddle in a great team at a great event, have fun and ultimately raise money for charity. The final race time was 1.26.46 which was worthy of the gold plate final, a result that we were truly proud to have achieved. Not only did we collect our souvenir Stanley T-shirts but we also brought home silverware. I could think of no better way to spend the day on Stanley beach. There are so many memories that I will hold on to forever and I feel truly honoured to have shared this unique experience with 18 of my team mates and now even closer friends.

Thanks to all who have organised, participated and continued to support the Windy Panda team and charity. Please continue to show your support on www.justgiving.com/windypanda2011

Who are we? – WINDY PANDAS 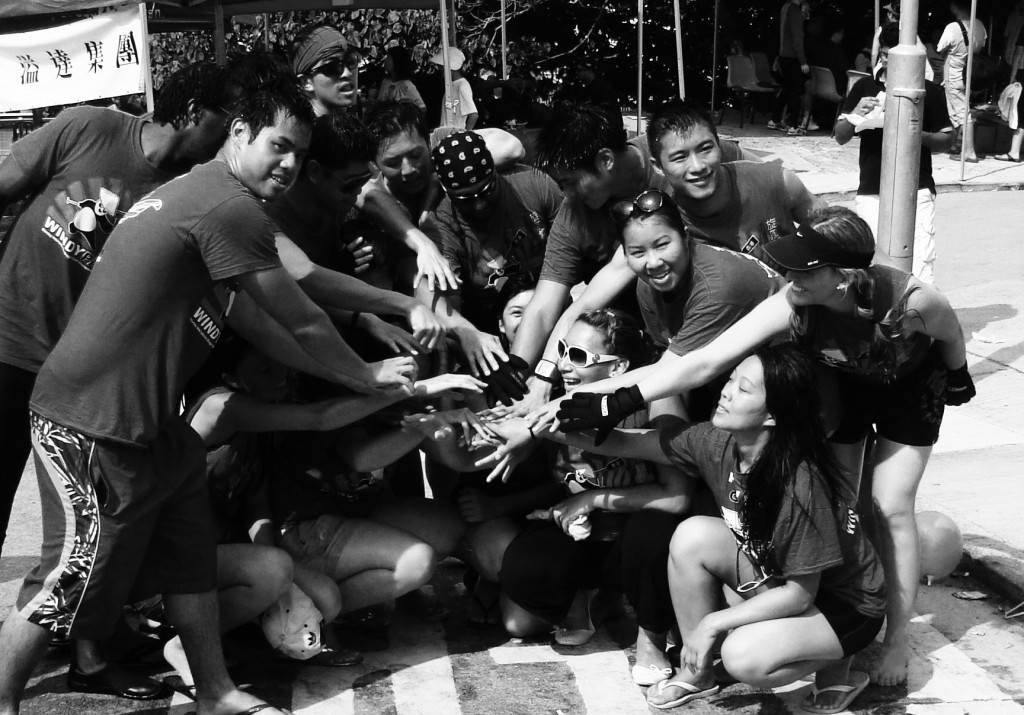 (from left to right, front to back of the boat)