Today was possibly one of the most emotional days for the pandas. But with determination and the mind set for the same goal, I feel revved up for another good day of Panda racing!

I managed to roll out of bed at 4:45am (yes, on a weekend) to meet my car pool gang at South Quay. Thinking I’ll have plenty of time to pack all my Panda Power munchies and have my morning cup of tea, I took my time and checked the tube status… Shockingly, of all days, nearly all my lines have tubeworks! I rush to get ready, wake my sleepy mum up to drive me to the station. I think my retained energy for the day has depleted by 50% by now – not to mention, I’m now munchies-less.

I arrive at our meet up point just in time for 6:30am but no one is there! I call Vanessa to find out where she is and she welcomes me with a big McDonald’s and my beloved cup of tea along with another 4 McMuffins for the other lucky pandas.

As we approached our destination, we are welcomed by postcard views of the tree-greens and sky-blue tones. But as we walk further to set up our temporary panda cave, we find ourselves walking into a sea of what appeared to be large black blobs of Nesquik cereal laid miles along the river side and a strong aroma… There was a lot of duck and swan poop, literally everywhere! With much determination to find somewhere Nesquik-free for our Pandas to settle, I failed miserably. In the end, we chose a place with a reasonable view and this was where we huddled together for the rest of the day. 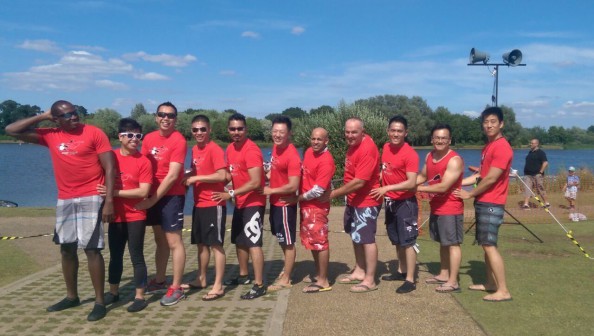 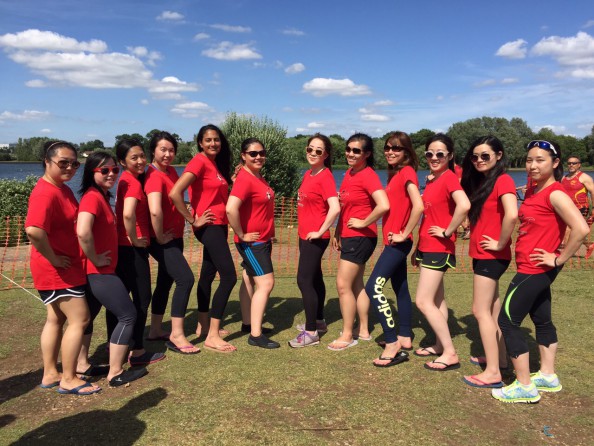 After our warm up, we circled together for our usual prep talk to ready ourselves for the race. Caldecotte is my second  BDA event and I know the races ahead of me after aren’t going to be easy! Especially being oblivious to the 500m races I was heading for!

We line up in our boat where I’m sitting there nervously in position. Our helm instructs us and we push off against the pontoon. While we start paddling, I hear our Panda subs shouting at the top of their lungs, ‘Come on pandaaaaas!!!!!!’ – This always ups my buzz just that bit further!

So we paddle to the race line and line up with our competitors. I look up and can’t help but get a streak of nervousness running through me, but then it breaks when I hear a burst of laugher after our helm jokes with the opposing team. It relaxes me a bit.

The caller speaks through the mic and after a mumble, all I hear is,

I quickly dip my paddle in and my hand is sunk in the water. The water is calm, warm, bobbing against my hand. All that I could tell myself was, ‘This is it; it’s ‘only’ 200m of powering through, then I’ll be able to rest after – I can do it!!’

I take a deep breath,

In unison, we grunt and pull away from the water which is now full of mini whirlpools and bubbles.

I’m pretty much blinded by the water splashing on my face by now and can feel the exhaustion starting to tire me out! But as an avenger, I fight back the exhaustion, call on my inner hulk and power on! We past the line and by now, I’m very curious where we’re placed against the rest of the other teams, as well as desperate to hear  the magic word, ‘eeeeeeasy’!

I look beside us and another team is side by side with us. ‘Close call’ someone shouts and we’re all left oblivious as we paddle back to the pontoon.

Race 3 – 4th placing us 16th, qualifying for the Minor Cup

As soon as we got back to our cave to rehydrate after the semi finals, we were quickly called on again to race. Having paddled for nearly all races today, I sat out of this one so another panda can have some action (I didn’t even know it was the finals!) So off went Grace ‘Medic’ Chan  to race instead.

Erica ‘Free styler’ Lau and I were subbing this one so we quickly grabbed the camera to capture the pandas in action. Not long after, we hear a shout from the team telling us to grab Paul’s paddle from the cave. I was pretty much oblivious what was happening except for Free Styler dashing away from me. I automatically assumed she’d come back to accompany me but 2 minutes went by… 3… 4… 5… And she didn’t come back. By now, I’m keen not to miss filming them so I’m back with the camera but what happened to Free Styler… ?!?

Soon after, I hear the cheers and shouting – indicating the race has started. I’m hidden behind a bush but have a very clear view of the finishing line. Just then, a dragons head pops out from behind the bush and I quickly start filming… IT’S THE PANDAS!!! They’re at least 5 seconds clear from the other teams and they’re heading straight to the finishing line. As they cross, I hear their loud cheers from the distance while I’m on my own sharing my excitement with the camera. And there’s still no trace of Free Styler… Anywhere!

I walk back to the pontoon, ready to congratulate and give my well dones to the team, but then a story unfolds…

I’m hearing different pieces from everyone, with all different emotions and they’re not all happy as I was…

A Penalty? A lost Paul? …And why is Free Styler on the boat too? Why do they look unhappy – didn’t we just win!?

As we huddle together for our team talk, the pieces gradually start fitting together…

1. Because of the tight race schedule, we are disadvantaged with a 2 second time penalty for being ‘late’ to the race. The opposing team also faced the same fate.

2. Paul is ‘lost’ as he is (too kindly) helping another team helm and didn’t have time to jump back to our boat for our finals!

3. Free Styler went to grab Paul’s paddle for Paul… But with a short timeframe, Free Styler was called in to paddle in place for Paul instead

4. We were leading well ahead of the race because angry and frustrated pandas transformed their anger and frustration  into some Panda Super Power to compensate for the time penalty – guaranteeing that win by a clean 7 seconds.

Nonetheless, I can sense the relief and joy (with some tears!) from the team that they won the 500s Minor Plate despite the penalty.

As a result, we placed 13th overall in the 500m competition.

It was another fun day out as usual with the pandas – I was constantly fed and consistently reminded I’m here to race but also to enjoy every bit of it because,